It would always be good to drop your unused indexes means which are not selected although they may be suffering from too many DML's, so its better to drop them as they are not getting used by select queries and its not good performance that you use them only for DML's. Let us see how to monitor the indexes and get a report :-

To alter an index, your schema must contain the index or you must have the ALTER ANY INDEX system privilege. With the ALTER INDEX statement, you can:

Below script will generate commands all you need for an entire schema to monitor the indexes :-

Index monitoring is started and stopped using the ALTER INDEX syntax shown below.

Information about the index usage can be displayed using the V$OBJECT_USAGE view.

In between you will also see below error :-

This means you cannot alter this index at the moment as there is already some changes going and you cannot get an exlcusive lock on it. Interestingly you should ignore this because this means the index is already being used/changed but selected, so you can do monitoring later for these indexes.

The V$OBJECT_USAGE view does not contain an OWNER column so you must to log on as the object owner to see the usage data.
Posted by karandodwal@gmail.com at 22:00 No comments:

Below we will learn how to Install Oracle Goldengate Software :-

Let us see with ls -ltr and check the zip file of the software :-

Posted by karandodwal@gmail.com at 20:12 No comments:

Email ThisBlogThis!Share to TwitterShare to FacebookShare to Pinterest
Labels: GoldenGate

In this article we will see  setting up a far sync configuration in your Data Guard Environment, We will also see how to integrate it with the broker but before the practical setup we will understand the concept of FAR SYNC INSTANCE.


In previous releases before 12C, the problem in sync configuration of primary to standby was that if geographical distance was very huge commit latency was affected for the primary because sync means transaction is not complete till the time standby acknowledges the redo change vector. Wouldnt it be great if primary database ships the redo to a dummy instance which is close to it geographically which means it can very well work in sync mode with it with a very good commit latency and later that dummy instance would transfer the redo changes to other standby databases in ASYNC mode without affecting the transaction commit latency for the primary database. Well yes it happens in Oracle Database 12C with a thing known as FAR SYNC INSTANCE.


FAR SYNC is a new enhancement in Oracle 12C Data guard, A Data Guard far sync instance is a destination geographically close to the primary which will accept redo from primary database and then ship it to the other standby terminals. This far sync instance is basically a light weight instance which just has a controlfile , standby redo logs and it archives the standby redo logfiles to local archive redo logs. This type of instance does not have any user datafiles so it means it cannot be opened for read access and it cannot run redo apply and also it can never function in primary role and also it cannot be converted to any type of standby. Its function is to receive redo quickly from primary in sync mode so that transaction on primary commits quickly and later if geographical distance is big between far sync and standby terminals it can keep up with those standby terminals later easily in asynch mode without affecting primary database commit latency.


Setting up a far sync configuration in your Dr Environment, We will also see how to integrate it with the broker.

## Below are the commands shown practically this time

Connected to an idle instance.

## We are almost done

Fixing it on primary database


## Fixing this on our standby terminal

## fixing this on far sync instance

## Far sync still shows inactive, to enable this we need to do the following

Configuration Status:
SUCCESS
Posted by karandodwal@gmail.com at 07:53 No comments:

Creating a Scheduler job with a specific country Time Zone

Let us see how to create a Scheduler job with a specific country Start Time with its respective time zone, Lets say i want to create a scheduler job in the oracle database where its start time should be tiem zone for country PERU because if you specify systimestamp it will take the database time zone which cab be lets say India and to create a job which has a start time of local time of country PERU will be created as below :-

Please note that we used America/Lima because its a time of Lima which is the captial of PERU.

Email ThisBlogThis!Share to TwitterShare to FacebookShare to Pinterest
Labels: Administration 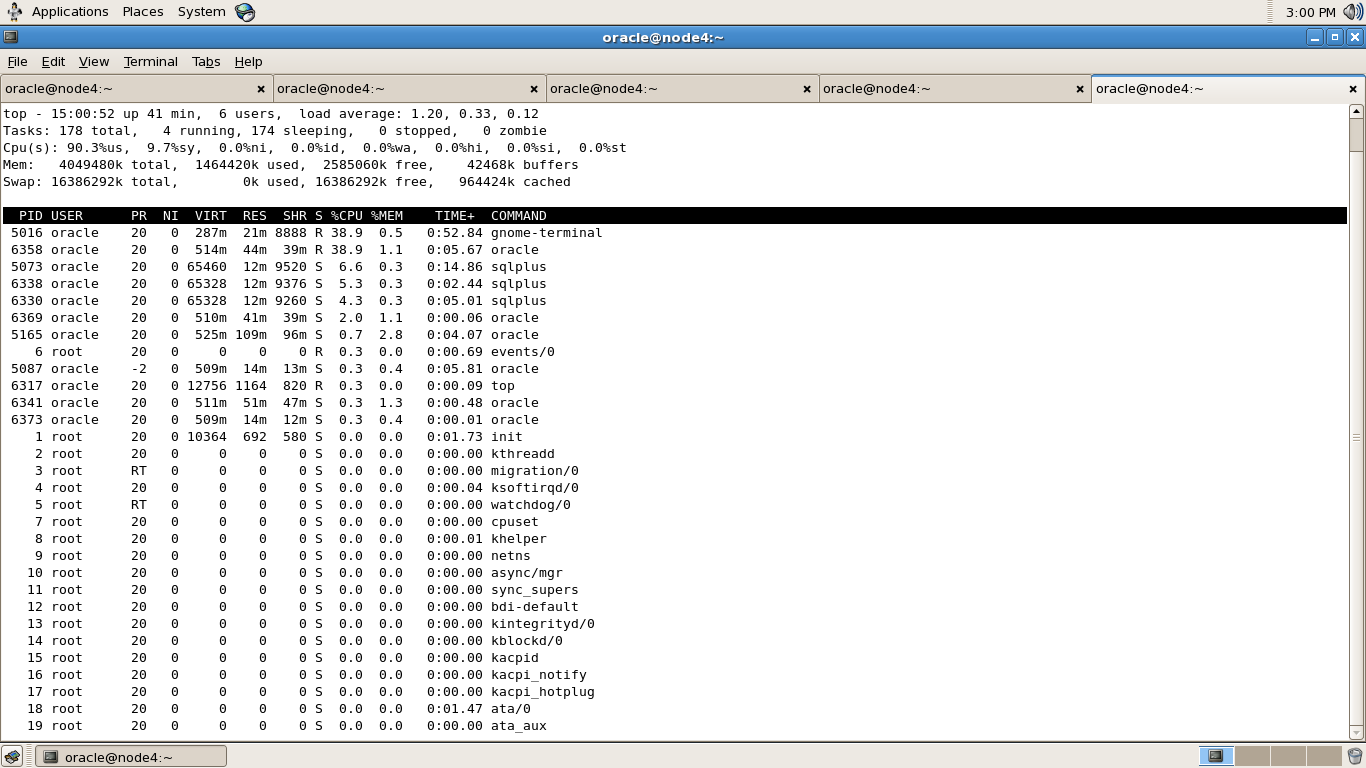 If you see the above snapshot taken of the TOP command, then lets understand this whole output and interpretation of TOP command in below notes :-

This first line indicates in order:

The third line indicates how the cpu is used. If you sum up all the percentages the total will be 100% of the cpu. Let’s see what these values indicate in order:

The fourth and fifth rows respectively indicate the use of physical memory (RAM) and swap. In this order: Total memory in use, free, buffers cached. On this topic you can also read the following article

And as last thing ordered by CPU usage (as default) there are the processes currently in use. Let’s see what information we can get in the different columns:

Posted by karandodwal@gmail.com at 02:43 No comments:

Parallel rebuild of an Index findings

In a recent finding i saw that a index was rebuilt with below command :-

Now the problem is that this parallelism sticks to this index forever, now if you read from this index also it would be read in parallel resulting in so many parallel reads and resulting too much of CPU usage, this is what we saw recently as it was degrading our OLTP performance specially during peak hours.

So it is better always to revert back this setting to normal after every rebuild in order for index to behave and work in serial mode rather than parallel mode :-

Normally if you are trying to shrink a compressed table lets say you get below error, and the trick to solve it is below :-

For partition tables and for normal tables

There are two possibilities:

(a) The SHRINK clause is not valid on a compressed table and you will get ORA-10635 .

(a) In case of a table being compressed table, can resolve issue like this:

(b) Autosegment space management was not set for the tablespace. Shrink operations can be performed only on segments in locally managed tablespaces with automatic segment space management (ASSM). Within an ASSM tablespace, all segment types are eligible for online segment shrink except these:
* IOT mapping tables
* Tables with rowid based materialized views
* Tables with function-based indexes.

b) In case autosegment space management is not set for the tablespace, please enable it. The way to “convert” to ASSM is to export all the objects from the MSSM tablespace, then create a new ASSM tablespace and finally import in this new one all the objects.
Posted by karandodwal@gmail.com at 01:38 No comments:

Email ThisBlogThis!Share to TwitterShare to FacebookShare to Pinterest
Labels: Troubleshooting


Its always good to check out at  AIOUG Events about which events are coming up and going on, Recently Oracle RAC DAY was a great event from AIOUG where people learned a lot, It started from Chennai and then chandigarh and then continuing to more cities of India. Stay tuned on the page AIOUG Events for recent updates. Happy Learning.
Posted by karandodwal@gmail.com at 04:25 No comments:

Email ThisBlogThis!Share to TwitterShare to FacebookShare to Pinterest
Labels: Events and Conferences

Difference between SPM and SQL Profiles

Difference between SPM and SQL Profiles :-

Below are some valid points regarding the differences of the above :-

A SQL Profile is generated by SQL Tuning Advisor and:

# Does not enforce a specific plan
# Does not guarantee plan stability
# Does not contains a plan at all, whereas SPM can contain multiple plans
# Is a collection of directives (generated by STA based on empirical information) which can be applied across many SQL statements to influence the optimizer to hopefully produce a better plan.
# Because no plans are recorded, if there is a change that results in a new, better, plan, then that plan would be lost if the change was backed out.
# Can be configured to match part of multiple SQL statement (ie can apply to SQL strings which contain all the same characters)
# If there is already a SQL plan baseline in place when a SQL Profile is created, the new plan is added to the baseline

Posted by karandodwal@gmail.com at 03:09 No comments: